Anyone who has been watching our Facebook Page will know how busy we've been over the last couple of weeks. So, grab cup of coffee for a bit of a catch up on The Gangsters adventures.

Exactly a week ago we were just going on stage for our final gig of the 'Back to the 80's' cruise aboard the Navigator of the Seas, after the most amazing week.

As always the band were in their Gangsters uniform and people were coming up and chatting with us, some realised that The Gangsters were one of the bands, while others thought it was a bunch of guys on a stag week! Everyone was so friendly and even before sailing there was a really party atmosphere. We had a couple of hours before we could get into our cabins and while searching for the buffet restaurant we met with Tony Hadley, who was more than happy to pose for a photo with us. We had a couple of days before our first gig and took the opportunity to catch some of the headliner acts and a few of the 'tribute' acts. We also met up with our sound engineer for the week 'Scooby' a bit of a sound check and he had The Gangsters sound absolutely spot on and sounding awesome. We later found out that he'd worked with some well known SKA & 2 Tone bands in the past. After a couple of days relaxing and eating far too much, Tuesday was upon us.Our first gig was late afternoon and we thought there would be a few people around, but by the time we went on the Star Lounge (later known as the Ska Lounge) was rammed. A few ladies got up and danced for the first couple of songs and people were seat dancing, but as soon as we played 'Poison Ivy' the place erupted and the dance floor was rammed. At some point in the set we played 'Lip Up Fatty' which is when we met 'Gangster George' who proceeded to cook the crowd up even more - especially when his t-shirt came off! After that first gig it was so nice to hear how much everyone enjoyed the band and that they couldn't wait for the next gig!

While we were ashore in Lisbon we met up with Mike Read (@MikeReadUK), who we went exploring with. He was telling us about the new radio show he was doing on United DJ's Radio (@uniteddjsradio), with other former Radio 1 DJ's. We gave him a copy of the new EP in the vain hope that he may play it! What a gentleman, we finally parted company at the Eurovision Village, as they wouldn't let us in with the camera or maybe it was the Gangsters t-shirts that made security a bit twitchy! We were also asked to attend an autograph signing and again were astonished with the response and positive feedback that we received. The biggest shock was that these 2 guys were in the queue too!

All in all the cruise was an incredible experience for us all, we met some wonderful people and made a lot of new friends. As soon as we were back we put together a highlights video which can be found on our fabcebook page (@gangstersSka) it has gone mad, at the time of writing it has been viewed 6.8k times and has been watched for a total of nearly 4,000 minutes. Mike Read has played the EP on his breakfast show and we are guessing that he likes Mr Lonely as he's played that 3 times now and apparently the guys in the studio were jumping around to it! Once again thanks to everyone who came to see and chat with us and to really kind comments that have been put on our facebook page. So, until the next time... 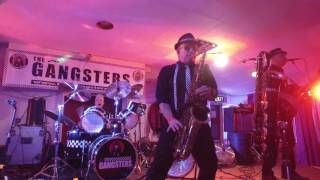 We are sailing across the seas... AGAIN!

SO BEGINS ANOTHER WEARY MAY!

The Gangsters Update No. 1